'Muddy' fundraiser misses out on team challenge for TASC | TASC

‘Muddy’ fundraiser misses out on team challenge for TASC 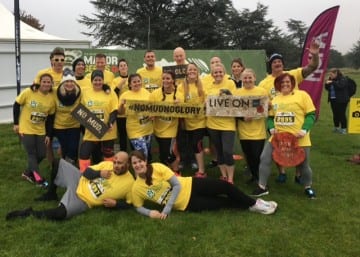 A paramedic who organised a muddy obstacle course challenge by a team of West Bromwich ambulance staff failed to make the starting line-up – after discovering she was pregnant.

Lisa West had helped put together a 21-strong team for the Major Series challenge at Ragley Hall in Alcester, Warwickshire, on October 22.

The group of 19 paramedics and technicians from West Bromwich ambulance station, plus two nurses from nearby Sandwell General Hospital, were all set to brave the gruelling 12k mud-filled obstacle course in aid of TASC, The Ambulance Staff Charity.

But Lisa, who jointly organised the event with fellow paramedic Holly Seymour, had to pull out after finding out she was pregnant just a couple of weeks before the event.

Despite withdrawing from the event, which sees competitors tackle a series of obstacles including muddy bogs and trenches and cold water lakes, Lisa was there to cheer her team-mates on as they raised more than £2,000 for TASC.

“I was really disappointed that I couldn’t take part after finding out I was pregnant, and I did sulk a bit on the day. But there are some pretty tough obstacles, such as swamp-type areas they have to swim through and carrying logs, so they were all exhausted and freezing afterwards. What was really nice is they all stuck together and went round the course as a group, taking around two hours 20 minutes.”

Lisa, who already has two daughters, Charlie, 11, and Tayla, eight, with her paramedic partner Jonathan, is now planning a similar challenge next year, which she intends to take part in.

“My baby is due next May so I will definitely be able to do that one. But, unfortunately, I’ve had to pull out of the London Marathon which takes place in April next year,” she added.

To support Lisa and her team, visit their fundraising page at: https://www.justgiving.com/fundraising/medicallychallenged
And to get involved in other fundraising events on behalf of The Ambulance Services Charity, email: enquiries@theasc.co.uk or phone 02477 987922.