Garden joy for former ambulance man thanks to TASC support 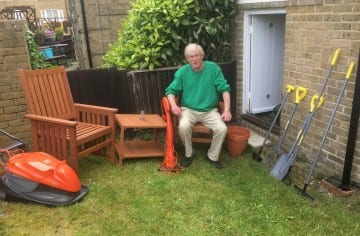 Peter Owen is looking forward to spending time in the peaceful haven of his own small garden after his world completely changed during a family holiday.

The former ambulance paramedic was left with a debilitating lung condition after suffering a blood clot while on a cruise with two of his children shortly after leaving South East Coast Ambulance Service.

But that diagnosis of COPD, or chronic obstructive pulmonary disease, in 2011 had sadly come after a deteriorating back condition that has reduced his mobility and also requires daily painkillers.

Peter’s health resulted in him moving into a sheltered ground floor flat near Canterbury in Kent in November last year. But the garden was so overgrown that it was virtually unusable, until Peter turned to TASC, The Ambulance Staff Charity for help.

The outcome is that Peter, aged 62, has been awarded a £500 grant from TASC to upgrade his garden and buy basic gardening equipment, including a lightweight mower, as well as a small table and chairs so he can sit out and relax. TASC has also offered access to free debt advice and is trying to raise separate funds for a riser chair and to enable Peter to have a short break.

Peter, who spent 25 years with South East Coast Ambulance until he took voluntary redundancy in 2011, says:

“TASC have been absolutely marvellous. I have a little garden out the back of my flat, but the person here before me was in a wheelchair so it’s completely overgrown. Thanks to the money from TASC I will be able to transform it so I can sit out instead of being stuck indoors looking at four walls. A friend of mine has helped pull out some of the overgrown bushes, but now it’s a question of sorting out the borders and getting some planting in, as well as chairs to sit on. It’s going to take time because I can’t do very much myself.”

Apart from the severe back pain and the breathlessness caused by his COPD, Peter, who has two daughters and a son aged 27 to 30, was also diagnosed with depression after his ex-wife left him 11 years ago. He adds:

“There are some days when I feel low so being able to sit outside in the sun will make me feel so much better.”

Peter, who has two grandchildren, Isla, aged two, and Zach, five, spent his ambulance career as a front-line technician, having previously worked as a cabin steward on P&O Cruises before later moving to a senior catering job at what is now P&O Ferries.

“My health problems started in around 1990 when I got a back injury lifting a particular patient. As I got older it got worse to the point where I am now on painkillers every day and also see an osteopath regularly. It was diagnosed as a joint sprain in my lumbar region but I now have osteoporosis in my spine which has left me with limited mobility.”

But his health deteriorated further when he decided to take two of his children on a cruise around Spain and the Canary Isles following his redundancy.

“I thought I had a chest infection but later realised it was something a bit more serious, so I took myself off to hospital where they found a blood clot on my lung. They injected me with anticoagulants to get rid of the clot but it left me with lung problems and I am now diagnosed with COPD.
“My world changed rapidly because I was always a sporting person but now I can’t do any of that. I have to be very careful in everything I do. Even talking I get breathless. I was put on inhalers which I am now on for life.”