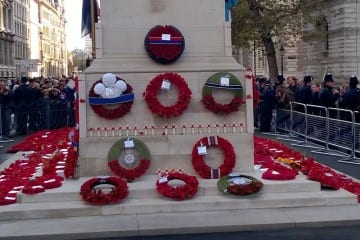 Representatives of ambulance trusts from as far away as Gibraltar took part in the Remembrance Sunday service at the Cenotaph in London.

The eight-strong ambulance group, which also included representatives from Scotland, the Isle of Wight and Isle of Man, formed part of the Civilian Services Contingent which took part in the parade in Whitehall and forms 25% of the static guard of honour around the Cenotaph.

The Remembrance Sunday event was also attended by retired paramedic Carl Ledbury who organised the ambulance service presence with help and support from TASC, The Ambulance Staff Charity. Carl was in London as a member of the co-ordinating team for the Civilian Services Contingent, which was made up of around 220 representatives from the police, fire and ambulance services, as well as other civilian groups including the Red Cross and St John Ambulance.

Around 8,000 people, many of them veterans and current military personnel, took part in the annual Remembrance Sunday parade, with Her Majesty the Queen leading the commemorations in front of crowds up to 20-rows deep in places. The Queen, who laid the first wreath, was joined at the Cenotaph by other royals and politicians, including the Duke of Edinburgh, Princes William and Harry and Prime Minister Theresa May. Peter Holland CBE, HM Chief Fire & Rescue Advisor, laid a wreath on behalf of the Civilian Services.

“I first took part in the Remembrance Sunday parade nearly 10 years ago, but on this occasion I was there as part of the co-ordinating team for the Civilian Services Contingent which I have done for several years now. It’s a very proud day for all the people who attend as the ones who get to go, such as those in the ambulance group, are not only representing their Trust but also the ambulance service in general. I am very grateful to TASC for their support, enabling me to go to London and be part of this wonderful occasion.”

As an added honour on the day, Carl and representatives of the ambulance services trusts were allowed to have a photograph taken outside No 10 Downing Street.
For more information about TASC, please visit www.theasc.org.uk or call 0800 1032 999.
Photo caption: Wreaths laid at the Cenotaph 2016. By Hammersfan – Own work, CC BY-SA 4.0, httpscommons.wikimedia.orgwindex.phpcurid=53127659

Find out about TASC's Memorial Service