Why Carl Ledbury is passionate about remembering our fallen ambulance staff 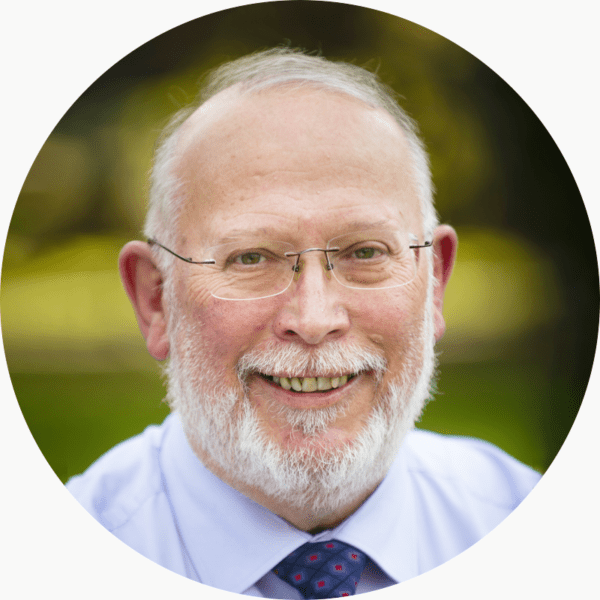 Honouring the dedication of ambulance staff, especially those who have died while in service, has always been incredibly important to TASC. From the creation of a permanent memorial site at the National Memorial Arboretum, to a Roll of Honour on our website and hosting a bi-annual National Ambulance Memorial Service, TASC is passionate about paying tribute to the fallen members of the ambulance community. No one champions this idea more strongly than TASC’s trustee, Carl Ledbury.

“It’s important that we remember those we have lost and recognise their dedication, passion and hard work for the UK’s ambulance services. For me personally, it’s also about recognising the service of my fallen colleagues.”

Originally joining the West Midlands Ambulance Service in 1976 as an Ambulanceman, Carl qualified as a Paramedic in 1987. Throughout his career he held a number of posts including Leading Ambulanceman, Control Officer, Incident Commander, Clinical Support Officer and Operations Manager. In the early 1980s, Carl became heavily involved with West Midlands Ambulance Service’s ceremonial unit, eventually becoming the unit’s Standard Bearer.

Carl retired from duty in 2012, but came back into the service later that year to complete project work which included overseeing ambulance cover of the V festival. Carl has received a number of commendations and awards throughout his career, including the Chief Officer Commendation in 2016. Carl finally retired in 2016 after 40 years of service and said:

“Without the support from my wife and family I wouldn’t have been able to achieve everything I have over the years.” 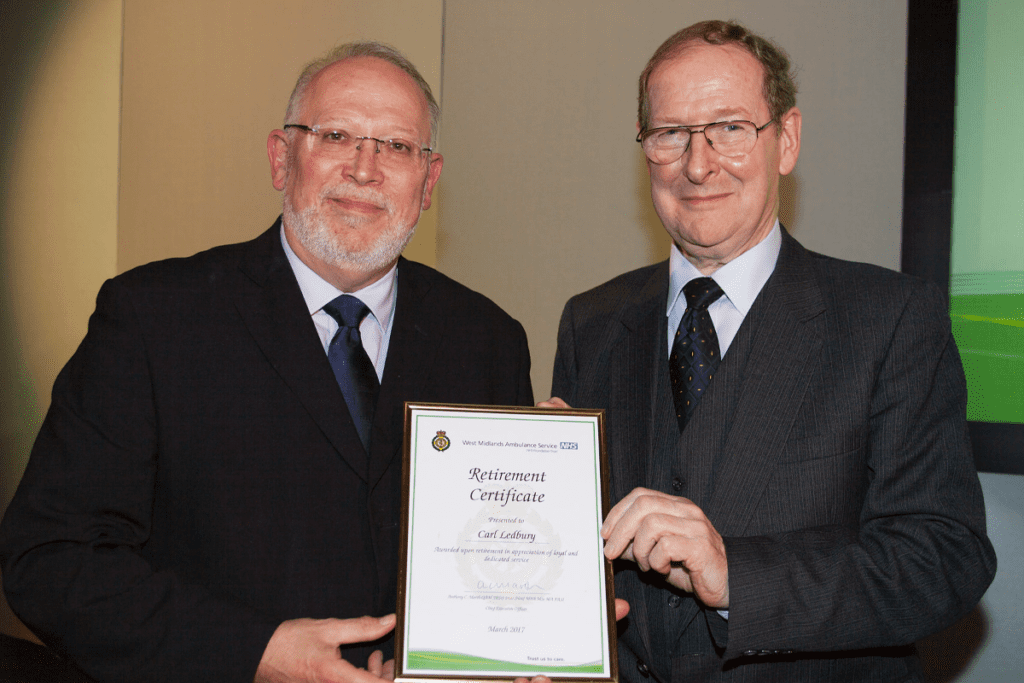 Here Carl explains how he became involved with TASC and why he is one of the biggest advocates for the National Ambulance Memorial Service.

“I have been a big supporter of TASC for years, all the way back to the 80s and 90s when it was still the Ambulance Service Benevolent Fund (ASBF). I have always believed in their ethos of providing support to ambulance staff when they needed it.

At the time, the ASBF only supported the financial wellbeing of ambulance staff and I remember speaking to Simon Fermor, as well as Gerry Brown and Gordon Enstone, who were also involved with the ASBF and are now my fellow TASC Trustees, and I remember talking to them about how we could move forwards and provide more support.

I was very happy when TASC was launched in 2015 to support the mental, physical and financial wellbeing of ambulance staff. During my career, I have had two nervous breakdowns and was diagnosed with PTSD. I was lucky enough to get support from my employer and GP, but I know some of my colleagues who were also having a rough time weren’t so fortunate. Over the years I have referred people to the ASBF and TASC and I can see the huge benefit a charity like ours can have.

After supporting the organisation for many years, I was invited to become a trustee in 2016, and I’ve been part of the charity ever since. While I take my trustee role seriously, TASC’s memorial services remain my key passion, especially the National Ambulance Memorial Service. The service is important to me as it allows us to pay tribute to those who are no longer with us and recognise the individuals’ service as well as their family members. Many people, colleagues and family members alike, tell us they draw a lot of comfort from attending the service.

I have been involved with the event since 2008 when the second memorial service took place. At this event I provided the opening address as a past president of the Ambulance Service Institute, and since then I have attended in a number of capacities, from as a guest to a representative of the ceremonial unit. More recently I have been responsible for reading the poignant poem ‘For The Fallen’ after the reading of the Roll Of Honour.”

As well as playing a significant role in TASC’s memorial services, Carl has also been a key player in the ambulance services’ involvement in the annual Remembrance Day parade at London’s Cenotaph. Every year the Civilian Service Contingent of the event is made up of nominated representatives from the UK’s statutory ambulance services, police forces, fire and rescues services, St John Ambulance, British Red Cross, prison services, and Women’s Royal Voluntarily Service. The contingent forms part of a guard of honour around the Cenotaph on Whitehall, where wreaths are laid by a representative of the Queen and dignitaries just after the national two-minute silence at 11 o’clock. This year’s Cenotaph is taking place on 14th November 2021.

“I became involved with the event in London around 2006 when I was invited to attend. At the time, Lawrence Day was responsible for organising the Civilian Services Contingent of the service. When Lawrence retired a few years later, I took over the mantle of arranging the ambulance service attendance, and I get a great deal of pride and satisfaction seeing the ambulance staff members parade on to Whitehall alongside the other emergency services and military. I continued to do the job every year until my retirement in 2016, and then continued to do the role on behalf of TASC.” 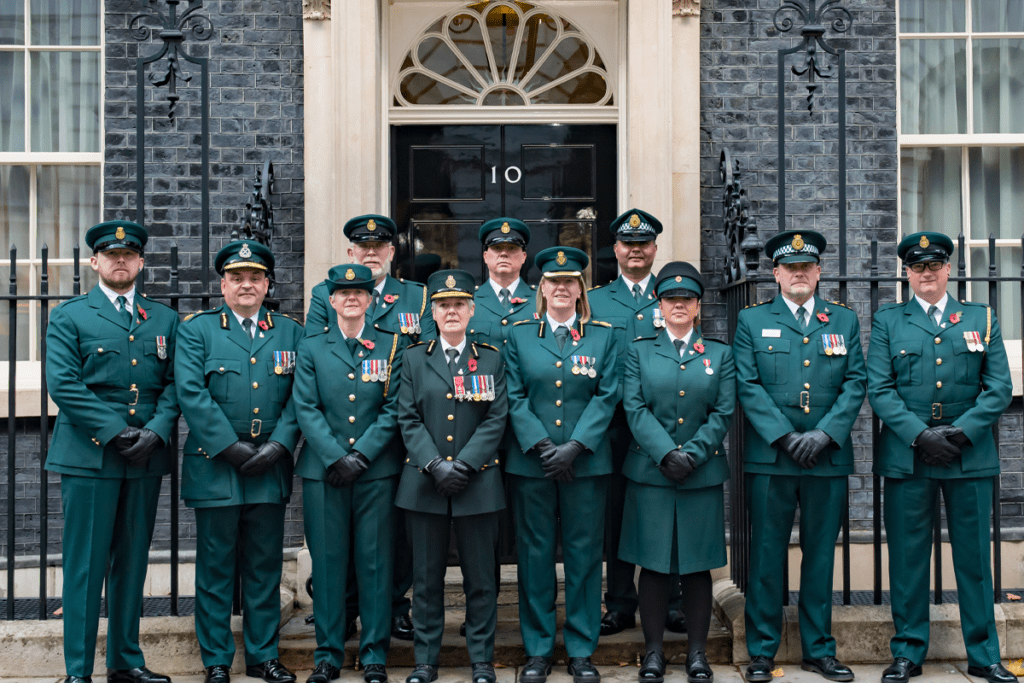 Carl Ledbury and his ambulance colleagues in London for the Cenotaph

TASC is dedicated to supporting the wellbeing of the UK’s vital ambulance services. As well as providing mental, physical and financial services, we also provide bereavement support to the friends, colleagues, and family members who have passed away. Visit our website to learn more.  We also hold an online roll of honour for those who have died while in service and host the bi-annual National Ambulance Memorial Service.

We can only continue being there for ambulance staff in their time of need with your help. Please support our cause by fundraising, donating or volunteering – click here to find out more about how you can get involved.