Why Have They Got More Than Us? Culture | TASC

TASC Vice Chair Seeks To End culture of ‘Why Have They Got More Than Us?’ 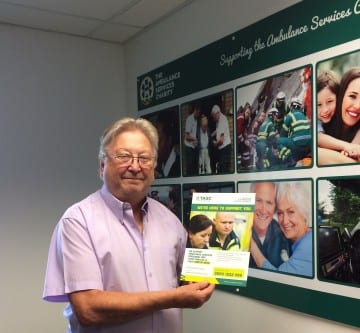 The Vice Chairman of TASC, The Ambulance Services Charity, has made an impassioned plea for members of the ambulance services community to help it support their colleagues in times of need.

Mr Gordon Enstone has spoken enviously of the backing which the other emergency services, the Police and Fire Service, receive from its members.

He is now urging the ambulance services community throughout the country to follow the example of police and firefighters in getting behind their charity and sign up to become an official TASC Supporter.

Mr Enstone, who spent 34 years working within the NHS ambulance service and a further 15 years in the private sector, said:

“If I had a penny for every time I’ve heard someone saying ‘why have they got more than us?’ over the years I honestly would be a millionaire by now.

“Throughout my ambulance career staff would always begin with that saying when they saw that the Police and the Fire Service staff get more than they did. But it doesn’t always have to be that way.

“When the Ambulance Services Benevolent Fund (ASBF) was in existence we were only dealing with around 25-30 calls for help a year. But as we were unpaid trustees we could only offer financial grants and disability aids. But since the launch of TASC in April last year the number of applications for help we have assessed has increased by more than 250 per cent compared to the previous year.”

Mr Enstone said TASC was now able to offer much more than before. He added:

“But the Police and the Fire Service have rehabilitation centres and convalescent homes which they are able to provide for their staff because the majority of staff actually pay towards that. There are more than 70,000 staff employed within the ambulance sector but only a fraction currently contribute towards their charity.

“We have had some great volunteers who have, and still are, raising funds for us. We also have a small but dedicated team in our office in Coventry, supported by an equally dedicated team of trustees who have either served in the service or bring a different expertise to the charity, but we need more help and support.

“Ambulance staff spend 24 hours of every day helping people in their hour of need. They are constantly looking after the welfare of others, and that is also our aim – to provide that same help to you.

“So, we are appealing to ambulance personnel to help themselves and their colleagues – and to stop asking ‘why have they got more than us?’ – by pledging support to TASC, either by ringing 0800 1032 999 or visiting https://www.theasc.org.uk/donate/and ask to pay by standing order or Give As You Earn via an employer’s scheme or TASC’s Giveall GAYE scheme.

“Staff can also support us by becoming a fundraiser or by volunteering to sell our badges and other merchandise.” (See https://shop.theasc.org.uk/).