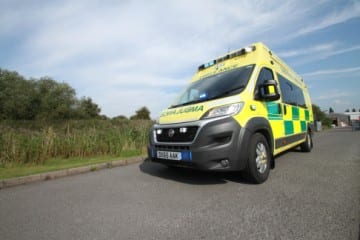 TASC, The Ambulance Staff Charity, has given a major thank you to the GMB East Midlands Ambulance Service branch for its support.

GMB officials invited representatives of TASC to attend its recent branch meeting at which a welcome cheque for £1,500 was presented to the ambulance charity.

“We all felt, as a branch, that it was the right thing to do. We have gone on for years about not having a benevolent fund when now we have TASC.

“Our branch President, Jerry Banks, was very much aware of TASC and now we know how to access it we have started to push more people towards it. We have referred ambulance staff to TASC for a number of reasons, including mental health issues and someone who had a stroke.”

The GMB East Midlands Ambulance Service branch has around 1,300 members, and the donation to TASC was made out of their monthly contributions.

“There is both a greater awareness now of TASC and also an increased need for the sort of service it can provide for our members.”

TASC was also invited to attend the national GMB Congress which took place in Plymouth, Devon, between June 4 and 6 TASC was afforded a free charity stand at the event in order to raise awareness of the services it offers to present and past ambulance staff and their families in time of need. The GMB Congress, which was shortened by a day due to the snap General Election on June 8, also provided TASC with an opportunity to reach out to people interested in supporting its work.

“We would like to thank GMB East Midlands Ambulance Service branch for their kind and generous donation, and the general support they have also given us. Donations such as this are very much appreciated as they enable us to continue to support members of the ambulance services community who really need our help.

“We met many GMB branch members and a number of ambulance staff during our time at Congress. These events are very important in helping to raise awareness of the services we offer to those who may need our help or who wish to support us.”