When TASC Met The Duke of Cambridge | TASC

TASC’s Chair and volunteer meet the Duke of Cambridge 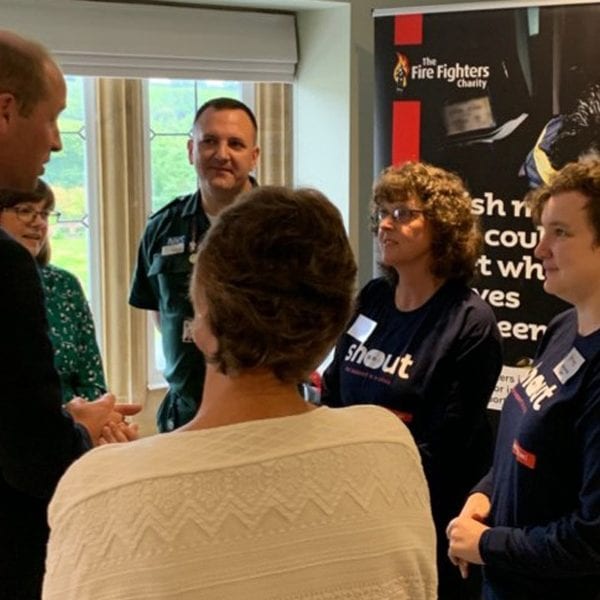 On the 9th September, TASC volunteer, Michael, joined our Chair at a 999 Day event at the Firefighters Charity’s treatment centre in Devon to raise awareness of the support TASC can provide the ambulance community.

The event also saw a visit from the Duke of Cambridge. Michael said:

“I was invited to accompany Sue Noyes along to an event hosted by the Firefighters Charity. As both a volunteer and beneficiary of TASC, this was both a privilege and an exciting opportunity to promote the work the charity does in partnership with other services.

“His Royal Highness The Duke of Cambridge attended at the Firefighters Charity’s Harcombe House centre in Chudleigh, Devon on 9 September – Emergency Services Day – to recognise the work of the charity in supporting the UK’s fire services community. His Royal Highness was taken on a guided tour of the charity’s newly renovated centre, which supports individuals, couples and families recovering from, or living with, poor mental health, injury and chronic illness, or supporting those adjusting to everyday living following a life-changing event. This is something I have personally experienced though funding provided via TASC.

“His Royal Highness and his party then greeted representatives from Police, Fire, Ambulance, and local charities such as mountain rescue and SHOUT UK (which he personally supports).
“The day was an amazing and humbling experience, I got to shake hands with Prince William and have a brief chat about the amazing work TASC does.

“The event also gave attendees the opportunity to network and share experiences where working in challenging environments has caused turmoil – which through support – has been overcome. It was a great and rare opportunity to gather like-minded people in one place as a celebration of what we all do.”

Register to become a TASC volunteer