The Ambulance Staff Charity (TASC), a national charity which provides the UK’s ambulance community with mental, physical wellbeing and financial support, is excited to announce the launch of its new brand and redesigned website at www.theasc.org.uk.

Beginning as The Ambulance Services Benevolent Fund in 1986, the charity officially launched in 2015. Since its creation, TASC has gone through a number of significant developments, including a recent change to its charitable constitution to now support UK ambulance service volunteers, and this rebrand reflects the changes in the organisation, it’s continued commitment to the people in the UK’s ambulance community and it’s vision for the future.

The Coventry-based charity’s new website was developed in partnership with local creative agency Rawww and features a fully responsive modern design, brand new content and improved functionality. The website will be updated regularly with useful information and advice and the charity’s latest news. There are also plans for the continued development of the site, including an online shop which will be launching in 2020. 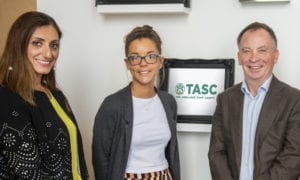 “2019 has been a year of great change for the organisation, including widening the range of support we provide and developing our services to deal with the increasing numbers and demand from the ambulance community. The entire TASC team and our partners at RAWWW have worked incredibly hard over the last five months and we’re very excited to launch our new brand and website – it’s the perfect way for us to end 2019 and begin the next chapter in TASC’s growth.”

“As a creative agency proudly based in Coventry, we love working with local organisations. To be working with a national charity like TASC, supporting the UK’s amazing ambulance community, gives the Rawww Team an added incentive to deliver a fabulous new website showcasing the great work TASC does.”