Paramedics Get In The Swim For TASC - tasc

Paramedics Get In The Swim For TASC 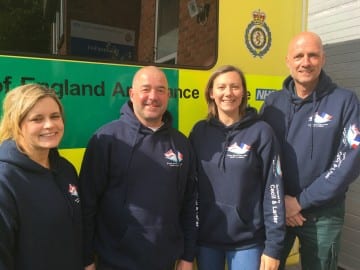 A courageous group of paramedics from East and West Suffolk are taking to the water in an amazing effort to help raise money for TASC, The Ambulance Staff Charity.

Two teams of paramedics and student paramedics from East of England Ambulance Trust will be aiming to swim the English Channel in relay this summer.

They hope to raise thousands of pounds in aid of TASC as well as the Ambulance Wish Foundation UK, which aims to help terminally ill people to fulfil their final wish.

The East and West Channel Swim Challenge, which is due to take place from near Dover to the French coast between June 30 and July 8, comprises two teams of six swimmers. One team, led by main organiser Mark Ransom, represents west Suffolk paramedics based at Bury St Edmunds, while the other team is being captained by Carl Friar and drawn from east Suffolk paramedics at Ipswich.

Together, the 12 swimmers, made up of ten paramedics and student paramedics, plus a lifeguard and oceanographer, will have to complete the approximate 21 mile crossing, with each swimmer having to spend an hour in the water at a time.

Mark, aged 47, knows what is in store for his colleagues having swim the Channel on his own in 2008. He says:

“It was an ambition I have had since I was a kid. I used to be a competitive swimmer and when I was ten I met Mike Read, who then held the world record for the most amount of Channel swims, at an awards ceremony. But I gave up swimming when I was 17 and never considered going back to it.”

However, when a fellow paramedic, who was also a keen swimmer, left the East of England trust in 2007, they decided to swim the Channel the following year.

“Unfortunately she had to pull out of the challenge, but I eventually got to swim the Channel when I was 38. Ever since then it was in my mind to organise a Channel relay swim. I had a couple of colleagues who knew of my ambition who kept saying to me ‘when are you going to do it?’, so a couple of years ago I decided to start planning it.”

Mark, who is married with three children aged 21, 20 and 17, and who lives in Bury St Edmunds, had originally decided on one team of six swimmers.

“I sent out an email to people who I thought would be interested and immediately I got about eight or nine colleagues saying they wanted to do it. So we decided to put two teams together, although I had to recruit a couple of non-paramedics in the end.”

Of the ten paramedics and student paramedics swimming the Channel, two have since left East of England Ambulance Trust, one to work at a GP surgery and the other based at a Care Commissioning Group. Training has been gradually building up to the Channel swim, the actual date of which will depend on the weather.

“Throughout the winter we have been training in the pool but we are now training in the sea. There are strict rules about swimming the Channel, so each swimmer taking part has to first do a two hour qualifying swim in open water in temperatures of less than 16 degrees, and without wearing a wetsuit.

“During the actual Channel swim, each swimmer has to go in for an hour at a time, so we will probably have to go in at least twice during the course of the crossing. Unfortunately you don’t go in a straight line because of the tides which drag you up and down the Channel. But it’s about 21 miles from point to point, and we should land on the French coast somewhere south of Calais.”

Each team of swimmers will be accompanied by a support boat where they can rest up between their turns in the water.

Carl Friar is the oldest swimmer among the two teams at the age of 51 while the youngest is 24. Carl said:

“I have been doing a lot of open water swimming in the past, such as triathlons, and a couple of years ago I did an Iron Man challenge in Tenby which involved swimming in the rough sea for over an hour. I knew Mark had previously swum the Channel, so when he suggested a Channel relay attempt, I did not hesitate to join in. I have always enjoyed team events and the prospect of raising money for ambulance charities in the process was too good an opportunity to waste.”

Carl, who has a partner and two grown-up children, works as a Locality Manager based at Ipswich. He has been in the ambulance service for 25 years having previously served as an army medic.

“I am quite proud of the fact that I am a bit older as hopefully it may help to inspire my younger colleagues to get involved in sport and live life to the full. I am now training regularly with the rest of the team, having started out in the pool and now doing open water sessions. The water’s only about 10 degrees at the moment so you can’t swim in it for long, but hopefully it will be a lot warmer by the end of June.”