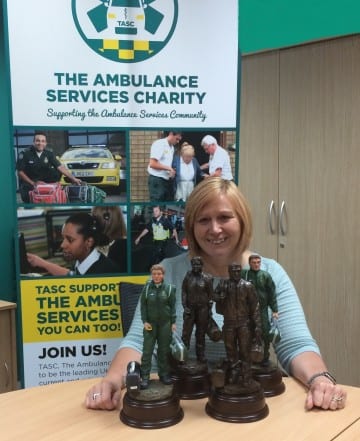 A company with 25 years’ experience of making sculptures has teamed up with TASC, The Ambulance Services Charity after adding a couple of paramedics to its collection.

Ballantynes of Walkerburn have been sculpting and manufacturing a wide range of presentation pieces to commemorate special events such as military operations, promotions, and long service since the company was formed in 1991.

After being approached by ambulance personnel at last year’s Emergency Services Show, the company has now sculpted two new statuettes, a male and female ambulance service paramedic.
The new bronze statuettes, made to a 12 inch scale with the help of two serving ambulance paramedics, will be provided to TASC at cost price for the charity to sell through its online shop or at trade events. The profit will go to TASC.

It is hoped that the sculptures, which are sold complete with an engraved brass plate, will prove popular both with individuals at graduation or retirement, or for ambulance services and companies during awards evenings.

“We exhibited at the Emergency Services Show last year and were approached by a number of ambulance services personnel who asked if we could sculpt and make a new pair of ambulance figurines.

“We have been supplying the fire service charity for many years and felt that we could do something similar for the ambulance service, so we produced these two statuettes of paramedics, one male and one female. We only finished them in the spring and are very pleased to work with TASC to get these out to ambulance staff. It’s a great way to help the charity.”

Ballantynes of Walkerburn, which also offers engraved crystal and glass ware, was formed in January 1991 and is now recognised as the major presentation and retirement figurine manufacturing company in the UK.

“I started the company when I left the Army – the Parachute Regiment – and started with a range of military sculptures. Later the business expanded into making products for the whisky industry. It has just continued to grow from there.”

If you wish to purchase one of these amazing gifts, and support an amazing charity at the same time, then please visit http://www.theasc.org.uk/tasc-shop and order them directly from the TASC online shop.