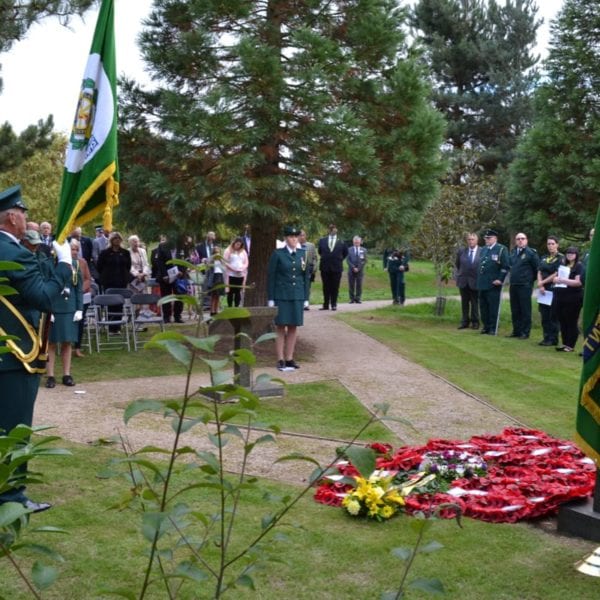 More than a hundred people from all over the country attended a moving national Ambulance Memorial Service to honour those colleagues who lost their lives while in service.

The service, held at the National Memorial Arboretum in Alrewas, Staffordshire, is an Act of Remembrance in tribute to those staff who died while working for the ambulance services of England, Scotland, Wales, Northern Ireland, the Republic of Ireland, Guernsey, Jersey and Gibraltar.

The event began with a poignant service at the Arboretum’s Chapel of Peace by Rev Kevin Charles, Chaplain at East Midlands Ambulance Service NHS Foundation Trust. The service included the lighting of four Thanksgiving and memorial candles.

The names of 57 ambulance personnel who have died in service since the last national memorial service in September 2016 were then read out from the ongoing Roll of Honour, which now contains more than 950 names. The names were read out by TASC representative Sam Leach and TASC Volunteers Steve McIntosh, from South East Coast Ambulance Service, and Chelsey Evans, of East Midlands Ambulance Service.

This was followed by the laying of 26 wreaths and floral tributes on behalf of ambulance trusts, retirement associations, Unison, TASC, the Association of Ambulance Chief Executives, and relatives of those on the Roll of Honour.

The Last Post was then played by Jenine Cryle from West Midlands Ambulance Service before a two minute silence, a closing prayer from Rev Charles and the Piper’s Lament from Ian Walley.

“It is a real privilege to host this occasion and I was really pleased with how it all went. It was a real team effort from both staff and volunteers. I can best sum the day up by what someone said to me, and that is ‘respect was due and respect was given’. Planning for September 2020 has started already.”

Steve McIntosh, Advanced Ambulance Technician and a TASC Volunteer for two years, said it was an “absolute honour” to be asked to help read out the Roll of Honour. He added:

“It is very important to have this memorial service to remember those who are no longer with us. I read out the name of one of ours which had a lot of meaning for me.”

And Paramedic Chelsey Evans, who recently ran the Leicestershire Half Marathon in aid of TASC, and is also a TASC Volunteer, said:

“It was a lovely service but clearly emotional. It was a real honour and privilege to read out names on the Roll of Honour. I was a bit taken aback to be asked.”

The National Memorial Arboretum comprises around 30,000 trees on a 150 acre site dotted with more than 350 memorials.