The history of the National Ambulance Memorial Service

The history of the National Ambulance Memorial Service 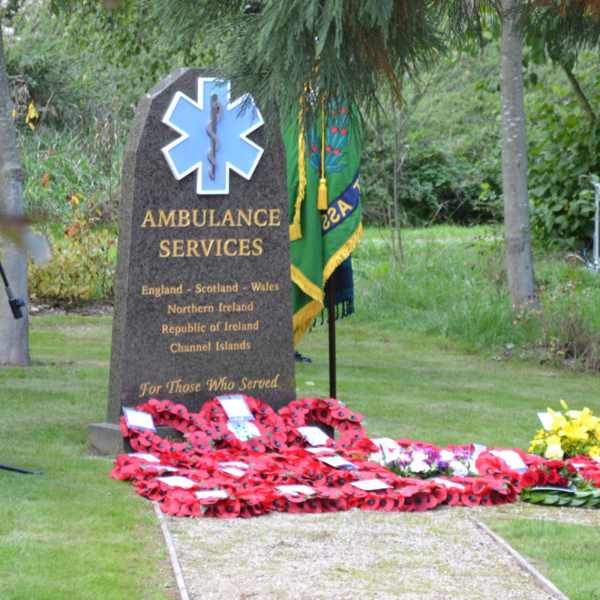 For the last 17 years, TASC, formerly known as the Ambulance Services Benevolent Fund, has hosted a bi-annual National Ambulance Memorial Service at the National Memorial Arboretum in Staffordshire. The event was created to honour, remember and thank the members of the ambulance community who have lost their lives while in service.

The first service took place in 2004 alongside the opening of the new ambulance memorial garden at the arboretum. The event took months of hard work from the Ambulance Service Benevolent Fund organising committee made up of Michael Saunders, Simon Fermor, Leonard Davies, Gordon Buckenham, Gerry Brown and led by Norman Lakin.

Norman’s dream of the ambulance community having a permanent place to remember those they have lost was decades in the making, and he was also a key driving force behind the memorial service. In 2008 Norman wrote:

“In the early 1970’s, when I was employed as the Chief Ambulance Officer for the Blackburn CBC, I was in conference with the Medical Officer of Health, when his secretary came in to inform us that there was an incident which involved an ambulance service member and that he was been rushed to the Blackburn Royal Infirmary.

I immediately drove to the hospital and spoke to the doctor who was attending him in the rear of an ambulance. He advised me that the ambulance member, Leo, had collapsed whilst attending an incident and that he was certified dead on arrival at the hospital. I made it my duty to visit his wife as soon as possible and inform her of the sad incident. On return to my office, I declared that one day we would have a memorial for the people like Leo.

In 1986 I was privileged to inaugurate the Ambulance Services Benevolent Fund covering England, Scotland, Wales, Northern Ireland, Gibraltar, and the Channel Islands of Guernsey and Jersey, and it still exists in that form today.

In 2002 I sent out 2,500 letters to find out about our colleagues who had died or had lost their lives whilst in the employment of an ambulance service. Later that year at the benevolent fund’s Annual General Meeting it was unanimously agreed that a remembrance garden and a befitting memorial for persons who have lost their lives, from whatever cause, whilst still serving in the ambulance services, would be situated at the National Memorial Arboretum, at Alrewas, near Lichfield, Staffordshire.

In September 2004 I was pleased to see our remembrance garden and memorial reach fruition when it was unveiled by the Minister of State for Health, Rosie Winterton, MP. to honour all ambulance services as a permanent commemorative, in loving memory of our colleagues. The Memorial project has been worthwhile in achieving what can only be described as a ‘Landmark in the History of the Ambulance Services’.” 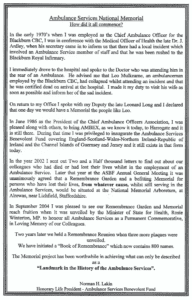 Norman’s words as featured in the programme of the 2nd National Ambulance Memorial Service.
Click on the image above to see the full version.

Looking back at the first ambulance memorial service

Gerry Brown, a current TASC Trustee, was a key part of the planning committee for the garden and the first every memorial service. As we move ever closer to the next service, Gerry has been reflecting on how this extremely popular event and site came to be. Gerry said:

“Norman was the real driving force in making the memorial and service happen, and it was Norman who discovered the National Memorial Arboretum – no one in the Ambulance Services Benevolent Fund had heard about it until he found it.

After being approved at the benevolent fund’s AGM, we set up the organising committee and came up with a plan on how we wanted to progress. Part of my role was to design the garden. I decided that I wanted the memorial stone to be the focal point, so I chose an ‘A’ path shape with the stone at the head and benches either side. I also chose to surround the path with Chestnut and Ash trees, which are very important to the ambulance community as they used to be the timber that make stretcher poles and splints for broken limbs.

I was also tasked with creating a metal badge to go at the top of the stone. I decided on the star of life in blue and white, which were the colours of the benevolent fund at the time. However, getting my design created was much harder than initially thought as it needed a one-off piece of metal casting. At one point we even approached McLaren to help, but time constraints with their F1 team prevented them from helping us. Luckily our President, Michael Saunders’ son, Darren, had trained as an engineer/product designer and we were able to use his contacts to eventually get the badge made.

In total it took about nine months from the start of negotiations with the arboretum until the garden was finished. As this was such an important achievement, we wanted to launch our fantastic garden with a bang, but we also wanted to use this opportunity to honour those the garden represents. This is how the first National Ambulance Memorial Service was born.

Through our contacts we managed to arrange for Rosie Winterton MP, the UK’s Minister of Health at the time, to unveil the stone. We had asked the Very Reverend Bishop of Lichfield, whose son was an ambulance officer, to officiate the arboretum in his dioceses but unfortunately, he passed away before the service and the Bishop of Gloucester kindly stood in to give the garden a blessing and lead on the dedication. As this was an event for ambulance staff, we knew it was important for as many of them to be involved as possible, so we arranged for an honour guard led by a Parade Marshall from Staffordshire Ambulance Service, and during the chapel ceremony we had organists from Staffordshire and Welsh Ambulance Services.

We invited chiefs and representatives from ambulance services across the UK, with many of them opting to attend including Roger Thayne OBE, the Chief of Staffordshire Ambulance. The event began with an emotional ceremony in the arboretum’s small Chapel of Peace. Roger Thayne welcomed everyone and various ministers spoke about the sacrifices made by ambulance staff. Following the ceremony, we walked down to the new garden and at this point we were also joined by more ambulance colleagues and family members who wanted to honour their fallen loved ones. Once the stone was unveiled, and the Bishop had completed his dedication, the President of the Ambulance Service Association accepted a book of remembrance as a tribute to those who we have lost.”

Today, the memorial service is open to anyone who wishes to remember and honour those who have lost their life while in service. It has become incredibly popular with the UK’s ambulance community, with people from all over the UK requesting to attend the event or offering to help out in any way they can. To find out more about our National Ambulance Memorial Service, visit: www.theasc.org.uk/our-memorial 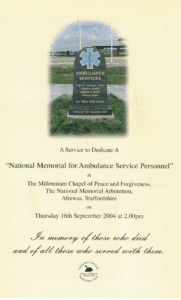 The front cover of the programme for the 1st National Ambulance Memorial Service.
Click on the image above to see the full version. 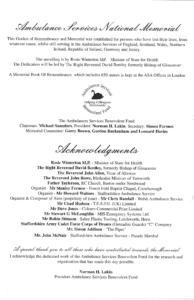 The back cover of the programme for the 1st National Ambulance Memorial Service.
Click on the image above to see the full version. 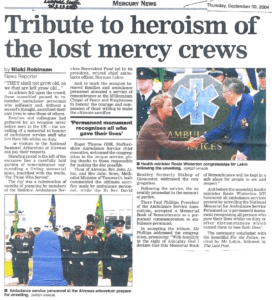 An article from a local paper about the first National Ambulance Memorial Service.
Click on the image above to see the full version. 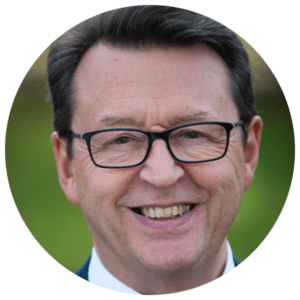 Gerry started his career as a construction engineer before joining Essex Ambulance Service as a trainee technician in 1981. Gerry had many roles in the ambulance service throughout his career including being a Paramedic, NHS Tutor, Ambulance Liaison Officer and Control Manager before retiring from service in 2009.

Gerry became a Trustee of the Ambulance Service Benevolent Fund in 1996 and served on the committee responsible for creating the permanent memorial and bi-annual service. Gerry left in 2015 when the benevolent fund became The Ambulance Services Charity and rejoined TASC’s Board of Trustees in 2017 after a two-year break.