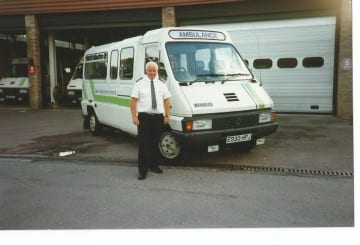 Frank Gribben always praised the dedication and care of the paramedics he observed while working for the Patient Transport Service when based at his local ambulance station.

And that same “professional and compassionate manner” was shown to Frank’s family by a rapid response paramedic who was first on the scene at the time of Frank’s sudden death owing to a massive heart attack.

His family has now given something back to the ambulance service after asking for donations to TASC The Ambulance Services Charity at his funeral in lieu of flowers. The In Memoriam donations in April amounted to £353.

Frank, who was born in Glasgow, but lived in Bristol for over 28 years, passed away in February this year shortly before his 75th birthday. Frank had enjoyed a 34 year career with the Post Office before taking early retirement in 1992 and, after a short break, joined the Patient Transport Service with Avon Ambulance.

“He took a bit of time off after leaving his job as an account manager with the Post Office, but then he saw an advert with the ambulance service which appealed to him. He was only going to do it part-time, but within two weeks he was working full-time.

“As was said at his funeral, he swapped his company car for an ambulance, his business suit for a uniform, and his briefcase for a rucksack. It was a complete transformation which surprised us all but he just loved it. He had to learn to drive an ambulance and go on first aid courses on a regular basis. Being a sociable person he got on really well with the patients and thoroughly enjoyed his work.

“He saw first-hand what life was like for the paramedics and technicians he worked alongside – long shifts, interrupted meal breaks and job-related injuries, not to mention the traumatic cases they had to deal with on a daily basis. He used to come home and tell us about the work of the paramedics and I think he felt sorry for them. They do seem a bit like a neglected service.

“We’d always said that a lot of flowers were a waste of money at funerals, so we decided to ask people attending to donate to a charity, but left the decision to them as it is a personal choice. Some chose to leave floral tributes and also donate to charity. I went online and found TASC The Ambulance Services Charity. I thought this was perfect and a fitting charity because he was in the ambulance service and because it is based in the Midlands, a region we absolutely loved when we were there when Frank worked for the Post Office in Birmingham.
“Frank would most certainly have approved.”