Ambulance team to 'get muddy' in aid of TASC - tasc

Ambulance team to ‘get muddy’ in aid of TASC 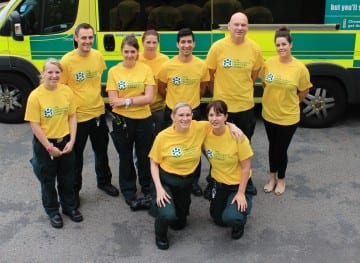 A team of ambulance service staff from West Bromwich are going the extra mile in support of charity by taking on a gruelling mud-filled obstacle course.

The group of 20 paramedics and technicians from West Bromwich ambulance station, together with two nurses from nearby Sandwell General Hospital, will be braving the Major Series challenge at Ragley Hall in Alcester, Warwickshire, on October 22. They have set themselves a £1,000 fundraising target.

The daunting challenge, which pits competitors against a series of obstacles including muddy bogs and trenches and cold water lakes, is aimed at raising money for TASC The Ambulance Services Charity which provides vital support to members of the ambulance service in times of real need.
The Major Series challenge, which is over a 6k or 12k course, has been jointly organised by West Bromwich ambulance station paramedics Lisa West and Holly Seymour, both of whom who are also planning to run in next year’s London Marathon. The 22-strong team will be taking part in the event under the name of “medically challenged”.

“I have known about the ambulance benevolent fund for quite a long time, ever since I became a student eight years ago, and I’ve been interested in TASC after it was formed last year. The ambulance service generally doesn’t really get much support, so we wanted to raise money for TASC. But it’s also about Holly and I improving our fitness as we’re trying to train for the London Marathon.”

Lisa, who qualified as a paramedic from Coventry University in 2010 after previously working in the retail and pub trades, added:

“I have had personal experiences which make me appreciate the work that TASC does. I’ve had close colleagues of mine who died from cancer while I was working for South Central Ambulance Service who would have benefitted from further support. One close colleague died from a brain tumour shortly before he retired. So this is close to my heart.”

Lisa, who lives with her partner Jonathan, who is also a paramedic, and has two daughters, Charlie, 11, and Tayla, eight, had always wanted to work in the ambulance service after witnessing a couple of accidents as a child.

A spokeswoman for TASC said:

“It is absolutely fantastic that Lisa and her colleagues are fundraising for TASC. We really do appreciate their support and we hope their efforts will encourage other ambulance staff to support their own charity.”

To support Lisa and her team, visit their fundraising page at: https://www.justgiving.com/fundraising/medicallychallenged
And to get involved in other fundraising events on behalf of The Ambulance Services Charity, email: fundraising@theasc.co.uk or phone 02477 987922.