Ambulance Team To Battle Fire Service On The Rugby Field 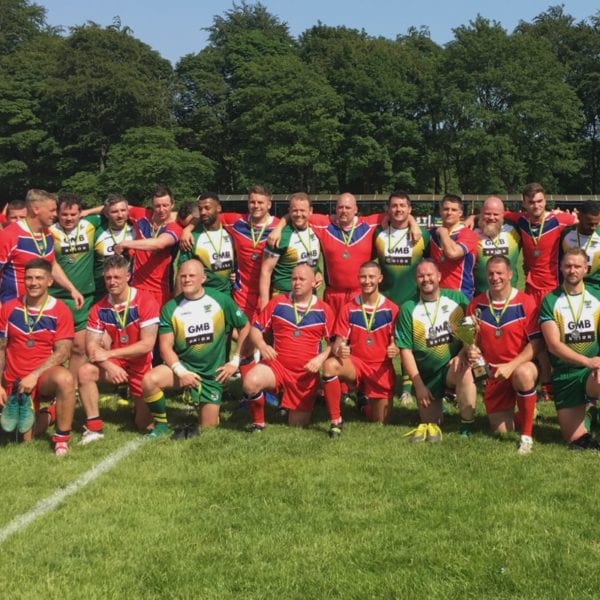 Ambulance team to battle fire service team on the rugby field… and what a match! The first ever charity rugby league match between the ambulance and fire services was held in Yorkshire – with the help of a former rugby Super League and Test star.

The game, involving the Yorkshire Ambulance Service and the West Yorkshire Fire Service, took place at the Huddersfield YMCA ground on Saturday 29 June, with all proceeds going to TASC, The Ambulance Staff Charity.

It is planned to make the emergency services match, which was sponsored by the Yorkshire and North Derbyshire region of the GMB union, into a permanent fixture.

The idea of the charity match came from Jenny Dobbin, a paramedic at Huddersfield Ambulance Station, and a TASC volunteer, who obtained backing in the form of sponsorship from her local GMB. It also gained the support of former Warrington, Leeds, Hull and Castleford Tigers prop Garreth Carvell, who has played a key role in establishing the Rugby League Players’ Association, a branch of the GMB.

Garreth, a project worker with GMB, who helps recruit and retrain rugby league players through the union, offered tips to both teams ahead of the match.

“Our region is heavily involved in rugby league, including sponsoring Castleford Tigers who are doing well in Super League. There is no equivalent players’ union for rugby league players, such as the PFA in football, so we have a lot of them in the GMB, which has created the Rugby League Players’ Association as a branch of the union.

“Garreth’s role within the GMB is to recruit rugby league players and then help them in terms of re-educating and re-training them for a new career when they’ve finished playing. So, when Jenny contacted us to say she had organised a charity rugby match we immediately said we would love to sponsor the event, particularly as the proceeds will go to TASC, who do a brilliant job of helping to rehabilitate operational ambulance staff in times of need.”

The GMB also agreed to sponsor the kit for the Yorkshire Ambulance team, whose players are drawn from all over the county, as well as provide funding for a winners’ trophy. Future proceeds of the annual GMB Charity Cup will go to other deserving charities.

“I wanted to set something up for rugby league players and so got in touch with someone from the GMB. The players’ association has grown quickly, with the majority of players now signed up, both full and part-time. We’re also working really closely with the RFL. The idea of the match came about after I met up with some of the ambulance people at an event and they mentioned it. I thought that’s right up my street and I would love to be involved. It’s great for rugby league, it’s great for camaraderie, and it’s great for TASC and future charities.

“I will be helping out both teams with a few tips, but after 19 years of playing rugby my body won’t allow me to take part.”

A thousand tickets were available for the June 29 match, priced £5 for adults and £2 for children under 16. Stalls were also available on the second team pitch for local businesses and organisations, as well as hot food and drink and children’s entertainment.