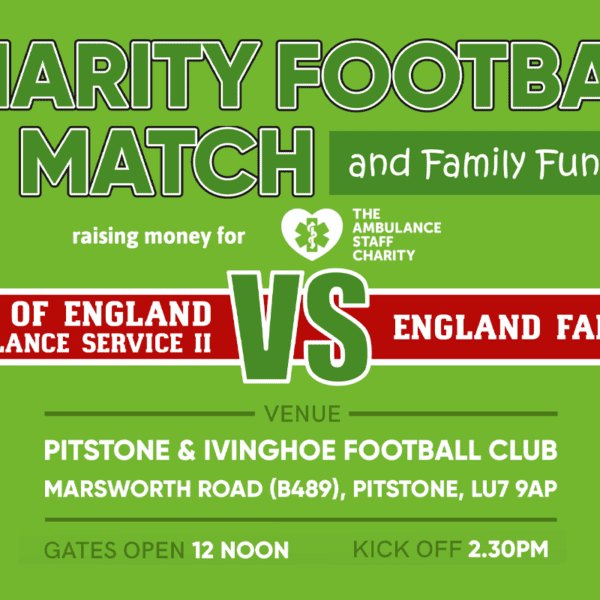 On Sunday 1st August, staff from East of England Ambulance Service and four ex-pro footballers will be playing against the official England supports football club in a charity family fun day at Pitstone and Ivinghoe Football Club. With the Euros finishing on the 11th of July, this charity match is the next exciting instalment in this year’s football calendar, and an event not to be missed! The match’s line-up includes appearances from:

“I am honoured to be asked to play in this event for such a good cause!”

A special appearance will also by made by Paul Hughes who will be taking part in the event as a guest manager. Paul is an ex-Chelsea player and made over 70 appearances for Luton before his retirement. He is currently the Team Manager at Hayes and Yeading United.

The charity football match and family fun day is taking place on Sunday 1st August 2021 at Pitstone and Ivinghoe Football Club, Marsworth road (b489), Pitstone, LU7 9AP. Gates open at 12pm noon and the game kicks off at 2.30pm.

Alongside fantastic football there is a going to be action-packed fun for all the family including inflatables, garden games, a penalty shoot-out competition, food and drink stalls, ambulance museum, vintage ambulances on display and a few extra surprises and guests! A raffle will also be held throughout the event with some amazing prizes including a football shirt signed by Robbie Savage, a Cadburys World family ticket and a BuyAGift bungee jump voucher.

Tickets for the football match and family fun day are £3.00 per person and under 10s go free. Tickets are available on the day at the gate or are pre-bookable at: www.facebook.com/tasc.footballmatch All of the money raised from the day will be donated to TASC to help support the UK’s lifesaving ambulance community.

The event is being organised by Rob Russell, a football fan and a serving Paramedic in East of England Ambulance Service. Rob decided to combine two of his passions to help raise money for TASC after a particularly tough year for the UK’s ambulance community.

“I am a serving paramedic and understand the importance of having a good mental state, and with what the ambulance service deals with on a day-to-day basis our mental health can decline. The Ambulance Staff Charity allows ambulance staff to access the support services for their mental health.”

“As a local community football club, we understand the value of having good community connections. During the Covid-19 outbreak the ambulance staff worked tirelessly to support each community and put themselves at risk to help others. By hosting this fun day it allows us to say thank you and help support those who care for us.”

Rob is aiming to raise £5,000 through this event which could help TASC fund an extra 98 physiotherapy sessions to support an ambulance worker’s recovery when they’ve been injured in the line of duty or an extra 83 hours of counselling for people struggling with their mental health.  To help boost his fundraising, Rob has also set up a JustGiving page at: www.justgiving.com/fundraising/robert-russell12

“We are so grateful to everyone arranging this fantastic day, especially Rob who has been a real driving force in getting the involvement of the local community and ex-pro footballers. Ambulance staff have one of the most stressful jobs in the UK, and the long-term impacts of Coronavirus are making their job that much harder. At TASC we’re passionate about supporting the mental, physical and financial wellbeing of the UK’s lifesavers, but we can only do this with the help of kind-hearted and generous people like Rob and his team. We can’t wait to attend!”

If you would like to support the UK’s ambulance staff by fundraising for TASC, please visit: www.theasc.org.uk/fundraising 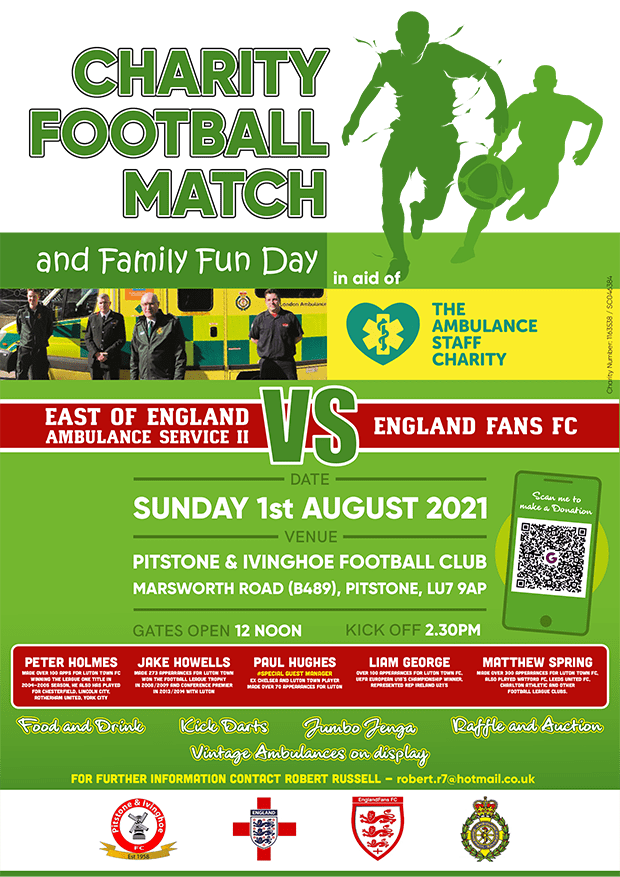