Ambulance staff strip off to raise money for TASC - tasc

Ambulance staff strip off to raise money for TASC 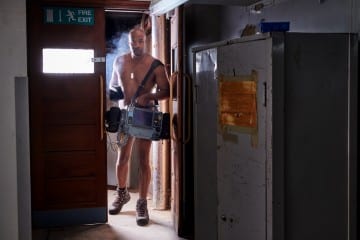 TASC has been chosen as the beneficiary of a 2017 calendar which reveals the men and women of the ambulance service as you have never seen them before.

Most people’s images of ambulance staff is of them attending emergency situations such as major road accidents or a severe illness at home.

But a group of brave volunteers, including paramedic Andy Willers from the recent BBC 1 three-part series Ambulance, have stripped away their uniforms to display the people behind the job.

Although the cheeky Ambulance Crew Calendar is intended as a bit of fun, the hope is that it will raise awareness of the people who are there to help when the public needs it the most.

The Calendar Girls’ style calendar is the creation of Medicnow, a recruitment agency specialising in providing ambulance crew to the NHS and private organisations.
All the profits from the calendar, which are being sold for £8 each, will be donated to TASC, The Ambulance Staff Charity.

All the nearly nude models featured inside the calendar, who were photographed behind strategically placed equipment, volunteered their time free of charge. As well as paramedics, they also included technicians, emergency care assistants and patient transport crew.

Kirsty Elton, Business Development Manager for Medicnow, who came up with the idea of the calendar, said that sadly ambulance crews faced a significant amount of verbal and physical abuse whilst at work, with 2,902 reported physical assaults alone in just five years (SIRS /RPA Violence Report 2010-2015).

‘We wanted people to remember that our ambulance crew are people – someone’s father, mother, son or daughter. The idea behind doing the calendar was to literally strip away the uniform and the ambulance and show these guys for the caring and hard-working people they are. They do an amazing job, work long hours and save lives, and they deserve our respect and support. As we’re sure you can imagine, we had a lot of fun making this calendar but we hope that it will help raise awareness of the people who are there to help when we need it most.”

The photo-shoot took place in Leeds over November and December in a building donated for the project.

Andy, who is the face of February, said he had no reservations about stripping off for the calendar, with the help of a well-placed medical bag. The 51-year-old paramedic with London Ambulance Service, said:

“It was absolutely fabulous and I thoroughly enjoyed it. It’s a great charity which does a lot for us. And it’s nice coming off the back of the television series which I thoroughly enjoyed doing. I think people have always known about the tattoos which are quite visible without having my shirt off.”

“It was for a good deed, to show people we are human and when we go out on the streets helping people we don’t deserve any hassle or delays in getting to people with problems. I had no problems posing for the photo, anything to help out other ambulance staff.”

Other volunteer models include Patricia Chadwick, a paramedic with North West Ambulance, and medical student Parisa Patel who works in patient transport for Medicnow.

A spokesperson for TASC said:

“We are delighted to have been chosen to receive proceeds from this ambulance calendar and would like to say a huge thank you to Medicnow for their support. Although the calendar is light-hearted, it has been tastefully done and also conveys a very serious message about supporting and raising awareness of the vital work that our ambulance personnel provide every single day.”

Copies of the calendar priced at £8 plus £2 delivery can be purchased from TASC, The Ambulance Staff Charity, by visiting www.theasc.org.uk or by calling 02477 987 922. They are also available from Medicnow by emailing kirsty@medicnow.co.uk.