Paying Tribute To The Fallen At National Memorial Service 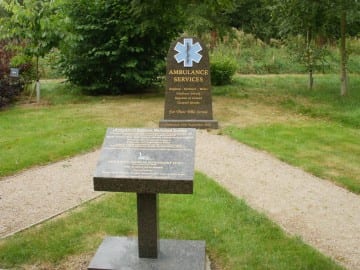 Senior representatives of ambulance services from around the country have been invited to attend the national Ambulance Remembrance Service which takes place at the National Memorial Arboretum in September.

The service, which will be held on Thursday 15 September at the Arboretum in Alrewas, Staffordshire, is an Act of Remembrance to honour the memory of all those who served and died while working for the ambulance services of England, Scotland, Wales, Northern Ireland, the Republic of Ireland, Guernsey and Jersey.

The event, organised by TASC, The Ambulance Services Charity, will start at 2pm with a private service at the Chapel of Peace by Rev Paul Fermor, Deputy Senior Chaplain at South East Coast Ambulance Service NHS Foundation Trust, together with readings by current or retired ambulance staff Carl Ledbury, Violet Hornby and Maria Fisher, and music from TASC trustee Cliff Randall.

This will be followed by the main service held next to the Ambulance Memorial within the Ambulance Services Garden of Remembrance, where the Roll of Honour will be read out by West Midlands Ambulance staff John Eames and Steven Rust and wreaths laid before a minute’s silence.

A final prayer by the Rev Fermor will be followed by a Piper’s Lament before the event closes with refreshments on the National Memorial Arboretum site.

Invitations to the event, which was attended by around 100 people last year, have been sent to the chief executives, chairpersons and HR Directors of all NHS ambulance trusts, as well as to the Independent Ambulance Association, NHS Fellowship, retirement associations, and former trustees and volunteers.

Learn more about our Memorial service