Ambulance Personnel Pay Tribute To The Fallen At Memorial Service

Ambulance Personnel Pay Tribute To The Fallen At Memorial Service 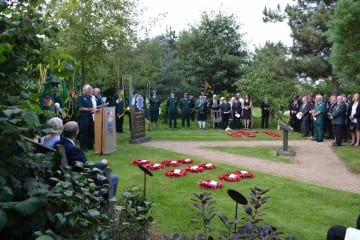 Senior representatives of ambulance services from around the country attended a moving national Ambulance Remembrance Service to honour colleagues who have died while on duty and in service.

The biennial service, which took place at the National Memorial Arboretum in Alrewas, Staffordshire, is an Act of Remembrance to honour the memory of all those who served and died while working for the ambulance services of England, Scotland, Wales, Northern Ireland, the Republic of Ireland, Guernsey and Jersey.

This was followed by the laying of 14 wreaths and floral tributes on behalf of ambulance trusts, retirement associations, relatives of those on the Roll of Honour, Unison and TASC. Marcus Main from the Welsh Ambulance Service then played The Last Post before the Rev Fermor gave a final prayer which preceded a two minute silence.

Learn more about our Memorial service