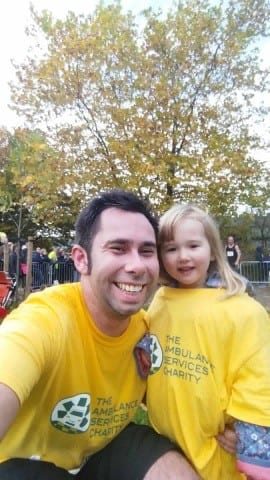 An ambulance paramedic received a helping hand from his young daughter as he raised cash for colleagues in real need.

Nicholas Old, a senior paramedic with West Midlands Ambulance Service, was taking part in the Leicester Half Marathon on October 23 when he collected three-year-old Abigail near the finishing line and completed the last stretch with her hand in hand.

He has so far raised more than £200 for TASC, The Ambulance Services Charity, as a result of his efforts.

Nicholas, aged 29, who lives in Rugby, is based at Rugby Community Ambulance Station. He joined West Midlands Ambulance as a paramedic in 2007.

He said after completing the Leicester Half Marathon in two hours 29 minutes:

“I wanted to support a charity that is close to myself and my colleagues and TASC does an excellent job in supporting members of the ambulance service.

“I collected my daughter, who was also wearing a TASC t-shirt, about 100 yards from the end and we walked the last part together before crossing the finishing line hand in hand.”

“I’ve collected £210 so far which I’m pretty pleased with considering my target was £100.”

Nicholas, who has now completed five half marathons in recent years, was also cheered on by his wife Kristy, 27, who is a student operating department practitioner.

Further information about The Ambulance Services Charity is available by visiting www.theasc.org.uk or by calling 0800 1032 999.